Packaging may vary based on manufacturing batches.

The long wait is over now as we’ve launched EAA Max — the best tasting amino acid supplement on the market.

Primeval Labs fans have been clamoring for a comprehensive amino acid supplement for years now, but truth be told, developing the perfect profile (with exceptional flavor) is no small feat.*

Sure, it’d be easy to just pump out some under-dosed BCAA-only supplement, but that doesn’t provide everything skeletal muscle tissue with what it needs to effectively synthesize more protein.

The wait is finally over now as Primeval Labs has launched EAA Max — the best tasting amino acid supplement on the market.*

When Can I Take EAA Max?

EAA Max is your all day, every day amino acid supplement. Use it on training days for intra workout fuel, or on non-training days as a way keep a steady supply of essential amino acids pumping into your muscles. Mix a scoop or two into a half gallon water bottle and sip throughout the day.*

That’s the great thing about EAA Max it can literally be used ANYTIME, ANYWHERE to support muscle growth and recovery. *

While there’s nothing wrong with BCAA supplements, they simply do not provide the full spectrum of amino acids the body requires for protein synthesis. Think of it like playing a game of football with only 6 of the 11 players — it just won’t work!*

Essential Amino Acids (EAA’s), on the other hand, contain the entire range of amino acids the body demands when it needs to build new tissue. EAAs are called “essential” because the body cannot synthesize them on its own. It MUST obtain them through food or supplements.*

Furthermore, most individuals aren’t eating a diverse enough diet, and therefore may be deficient in some EAAs. Plus, some may be eating a well-balanced diet, but may not be absorbing the nutrients properly.*

Either way, the end result is EAA deficiency and lack of protein synthesis!*

EAAs not only stimulate protein synthesis, but they support energy production and cellular repair.*

Additionally, EAAs are needed for complete and healthy digestion and nutrient absorption. EAAs also support each cell’s mitochondria — the “power plant” of the cell that generates ATP!*

Leucine is the best known, and well researched, of all the amino acids. It’s also the BCAA to which most of the benefits of BCAA supplementation is attributed. The reason being, is that Leucine as a powerful stimulator of the mechanistic target of rapamycin (mTOR).*[2]

Note: mTOR used to stand for mammalian target of rapamycin until recently

mTOR is a cellular signal “highway” that serves as the primary regulator in the body of cell growth, proliferation, survival, and metabolism.[3] Specifically, mTOR1 is the one responsible for muscle protein synthesis (i.e. building muscle). Additionally, leucine is also helpful for preventing muscle protein breakdown (a.k.a. catabolism) — keeping you anabolic even during periods of fasting!*

It’s easy to see why Leucine is widely regarded as the “king” of all amino acids when you put these benefits together.*

Think of Isoleucine as the weaker “younger brother” of Leucine. It’s a more mild stimulator of muscle protein synthesis — weaker than Leucine, but stronger than Valine. However, where Isoleucine does stand out is in its ability to increase glucose uptake as well as glucose use during high intensity exercise.*[4]

Last of the BCAAs is Valine. Though not studied to the extent of Leucine and Isoleucine in isolation, Valine has been shown to be essential for energy conversion in the body as well as enhance glycogen synthesis in skeletal muscle, preventing catabolism.*[4]

While it may seem inconsequential compared to the previous two BCAAs, Valine is the third critical “leg” of the BCAA trifecta that contributes to increased muscle protein synthesis, repair, and growth.*

First up for the Essential Amino Acid portion of EAA Max is L-Lysine. Among Lysine’s major functions, most pertinent to its inclusion here is its role in constructing muscle protein, aiding injury recovery, and supporting calcium absorption.[5]*

Additionally, Lysine is also necessary for carnitine production. Carnitine is a substance in the body that supports energy production via fat conversion. It also plays a vital role in synthesis of collagen, skin, cartilage, and tendons.*

Threonine was the final amino acid to be discovered by William C. Rose.[6] It’s an alpha amino acid necessary for the synthesis of proteins in the body. Specifically, threonine is needed for the synthesis of serine and glycine to drive muscle protein synthesis. Additionally, threonine also teams with methionine and aspartic acid to assist the liver with the digestion of fats, also known as lipotropic function.*

Phenylalanine is an essential amino acid vital to optimal Central Nervous System functioning. It easily crosses the blood-brain barrier where it’s used to create three highly important neurotransmitters that essentially govern the way you interact and view your surroundings.*

Furthermore, increased levels of these three neurotransmitters translate to increased energy, mood, and focus — all critical attributes to maintaining performance when training.*

As the sole precursor of serotonin, L-tryptophan is vital to optimal serotonin production on the brain, which is an important factor in cognition, behavior, and overall mood.[7] The problem is that Tryptophan is the amino acid with the lowest concentrations in the body[8], so supplementing with extra ensure you have the adequate raw materials needed for sufficient serotonin production, and don’t have to worry about any bouts of depression!*

Interestingly enough, researchers have observed that only the “L” form of amino acids (other forms such as DL-Tryptophan, DL-Phenylalanine, etc. exist) can be used by the body for protein synthesis and cross the blood-brain barrier (BBB). This is why Primeval Labs includes ONLY the L-based amino acid forms in EAA Max — quality matters!*

Histidine is a precursor to histamine and an essential component for cognitive functioning and wakefulness.[9] The reason for this is that histidine is needed for the development and maintenance of the myelin sheaths that cover nerve cells and support signal transmission from the brain to all the various component of the body.*

Last but not least of the EAA portion of EAA Max is Methionine. Among the numerous critical functions that Methionine is involved in, first among those is its role as a lipotropic, substance that assists the liver with fat digestion. Furthermore, methionine also acts as a precursor for L-Cysteine, a powerful antioxidant in the body which helps defend against free radicals and oxidative stress brought on by intense exercise.[11]*

Cluster Dextrin gets immediately transported into muscles where it can provide a reliable source of energy and enhance nutrient delivery, thereby supporting muscle growth and repair. This is the exact carbohydrate you want packaged with your essential amino acids for maximal nutrient transport and absorption!*

D-Ribose is a supplemental variation of ribose, a sugar produced from the digestion of glucose, that combines with adenine to form ATP, the primary energy driver of cellular metabolism.

During intense training, ATP is rapidly depleted, which leads to decreased stamina and performance. D-ribose effectively regenerates ATP reserves in the cell following exercise[12,13], which keeps performance at peak levels throughout even the most grueling training sessions. due to the demands placed on the muscle.* 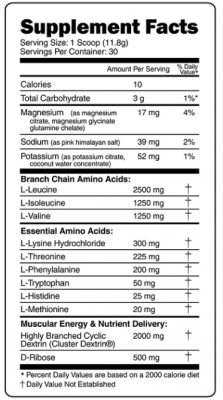 SUGGESTED USE: Mix one scoop (11.8g) of EAA Max in 10-12oz of cold water and consume during exercise on training days or throughout the day on both training and non training days. 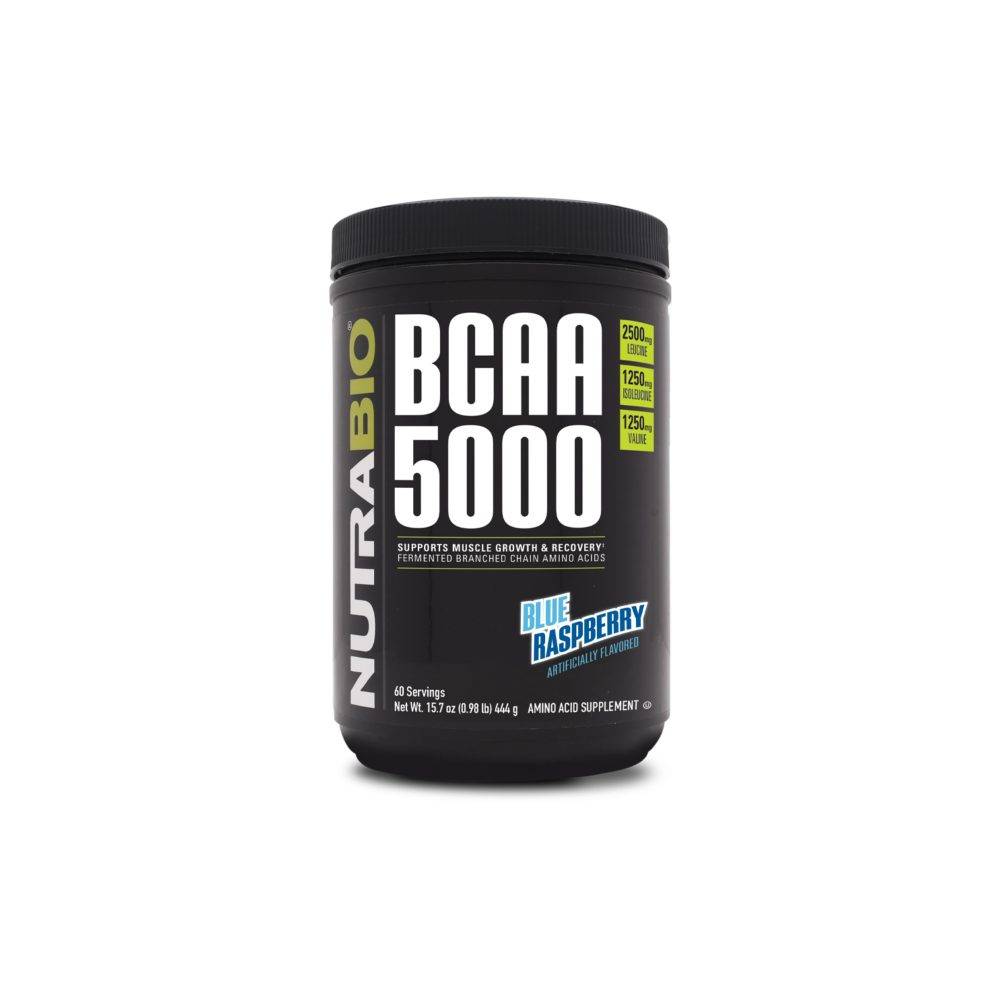 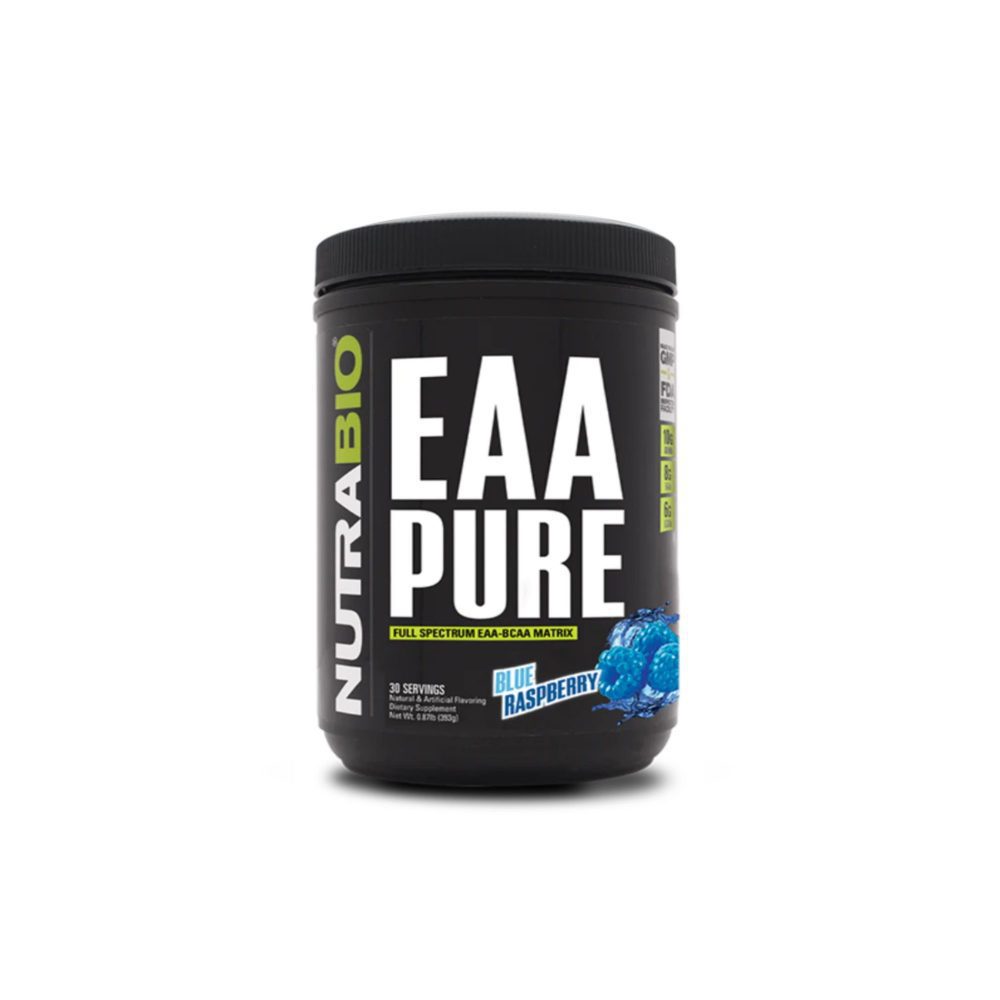 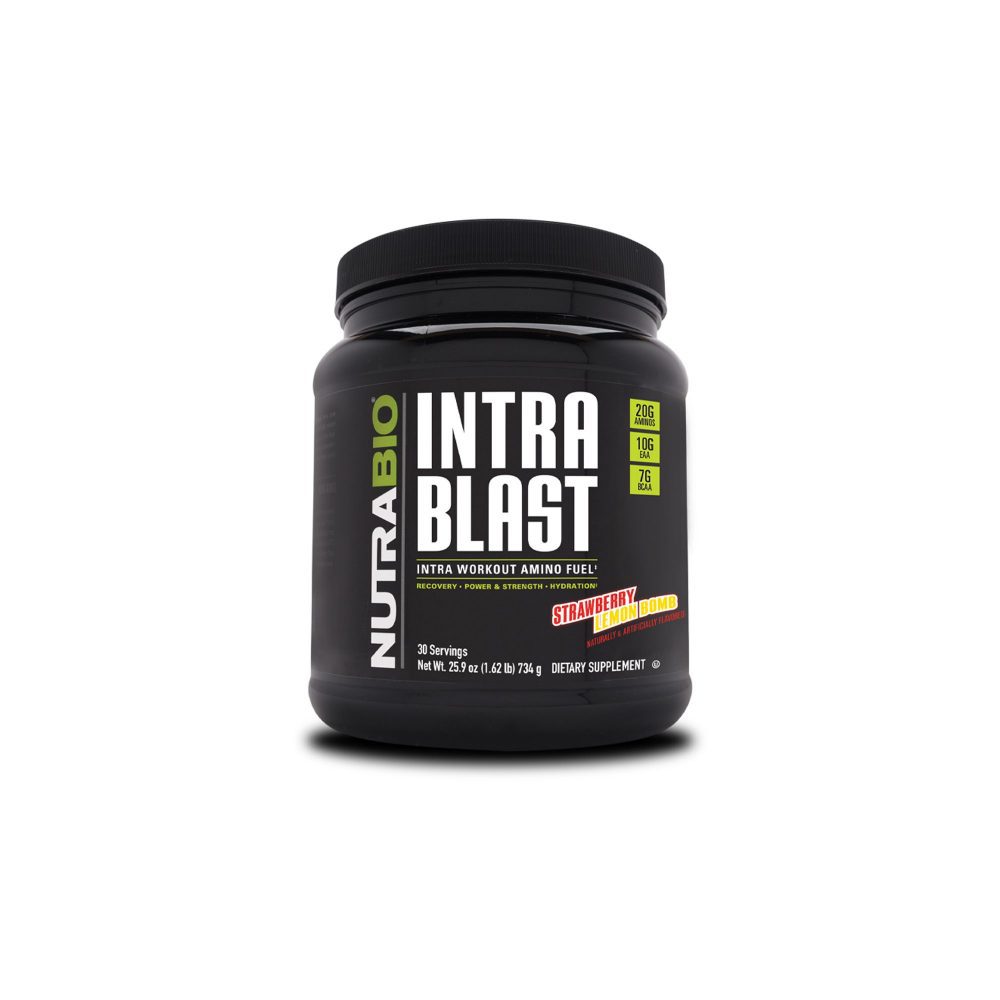 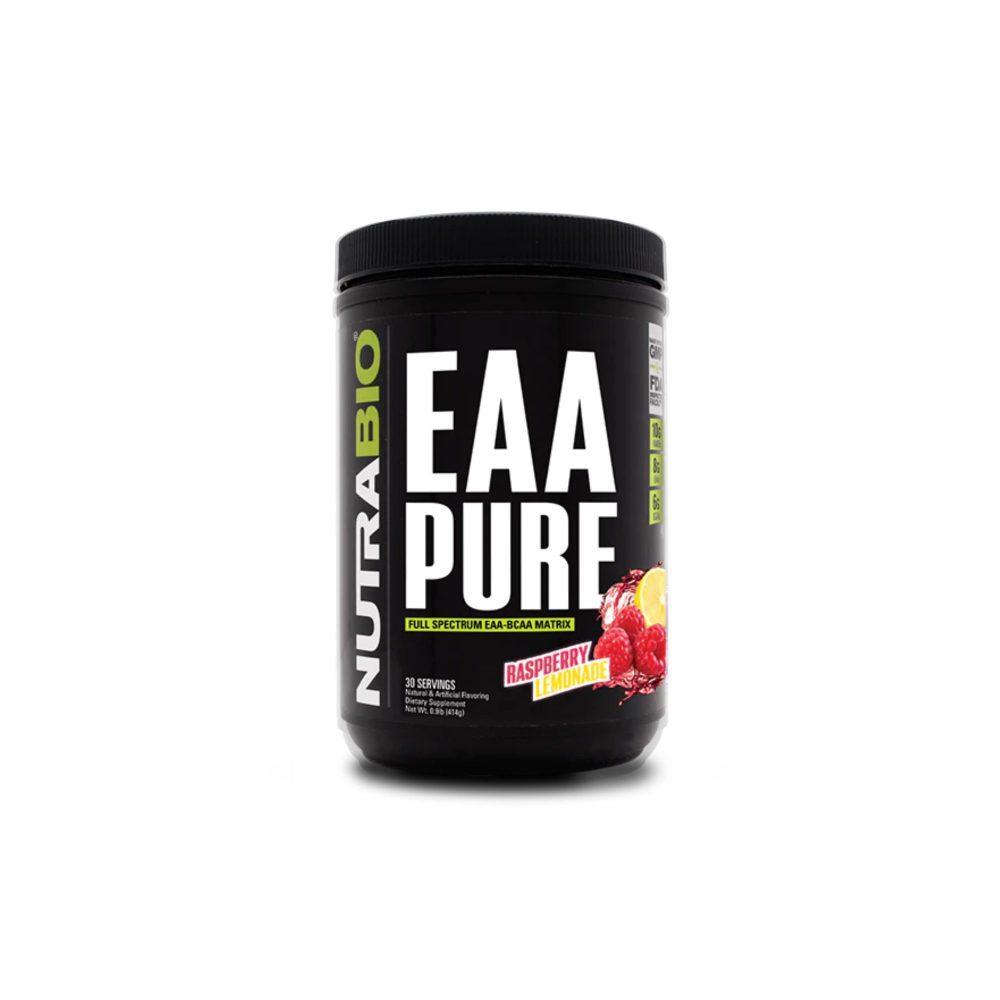 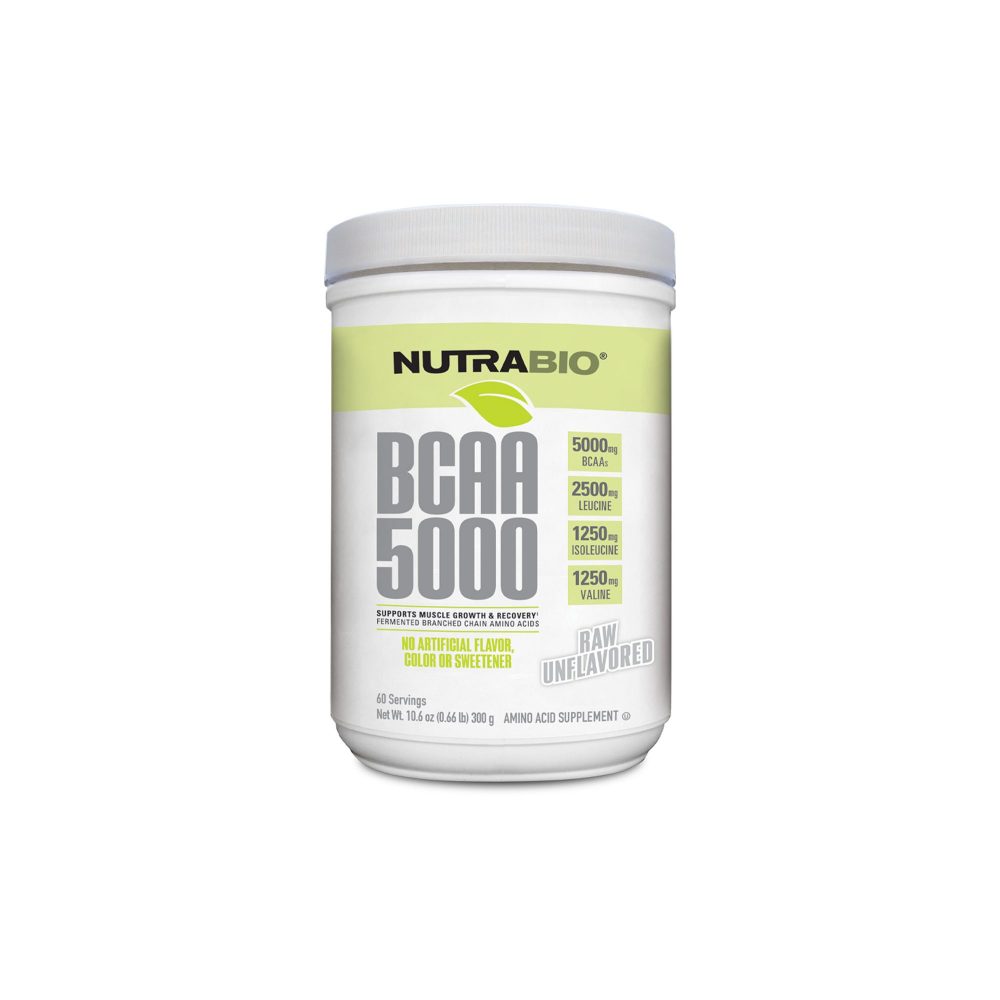 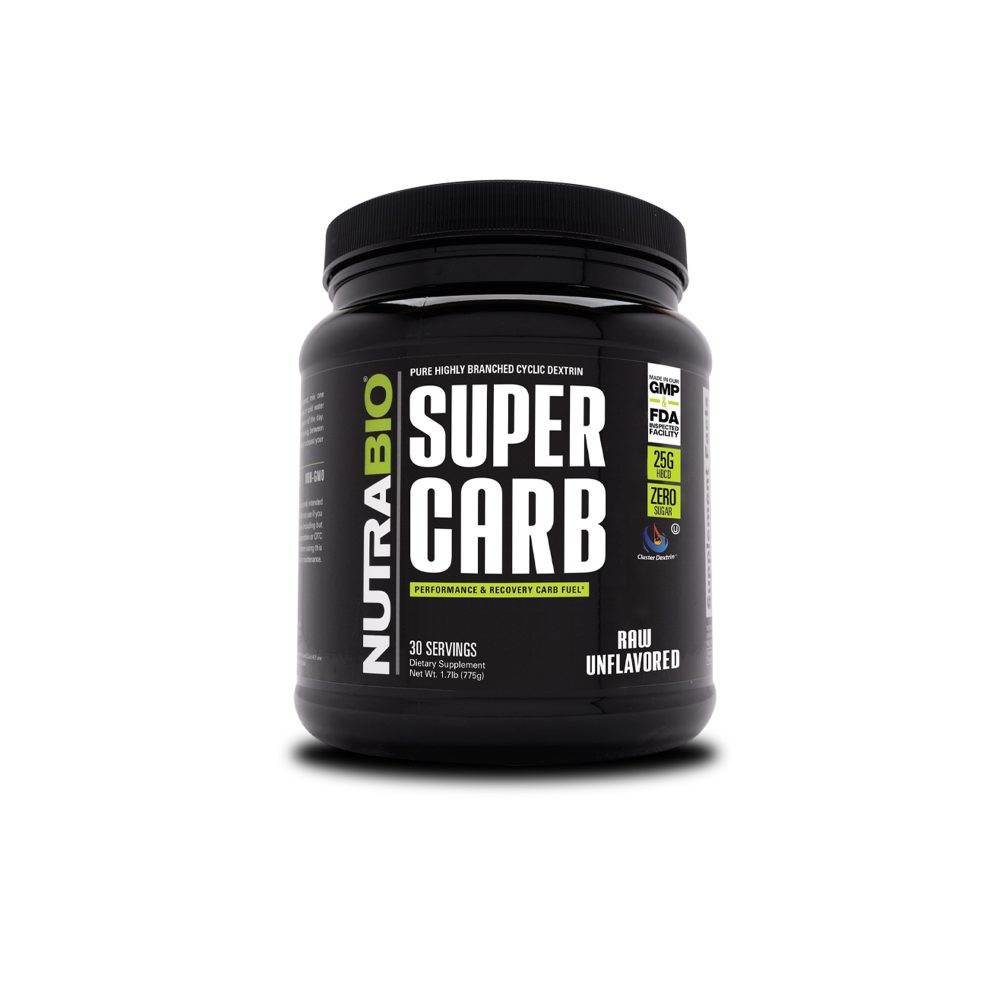